what is music worth? what is a compostion worth?

its a golden good!

GUDRUN GUT
Gut is active in the music-scene since the 80ies, founding member of the bands mania d, malaria!, matador. Since 1993 spoken word + performance project “Miasma” together with myra davies. Solowork since 2007. Various record releases and live appearances worldwide. Together with Hans-Joachim Irmler /Faust) they are  Gut und Irmler – the album „500m“ was released 2014 on Bureau B. 2016 Release of “Vogelmixe” for Heimatlieder aus Deutschland. Both for Golden Good Publishing.

ISLAJA
“Islaja or Merja Kokkonen is a singer-songwriter and musician from Helsinki, Finland. Besides her solo career, she is a member of free improv and psych folk bands Avarus, Kemialliset Ystävät, and the trio Hertta Lussu Ässä. She has been compared to Björk, Syd Barrett, and Nico. Her music is notably psychedelic and very intimate using a large variety of instruments.”

NATALIE BERIDZE
“Natalie Beridze’s music is of a rare, bewitching beauty – even when her beats are shredded or when she rocks with an abrasive four-to-the-floor. She moves within her own characteristic tonality of diminished chords that frequently extends into the minor harmony – a tonality within which an unsettling, questioning undertone often resonates alongside the sense of melancholic longing…. She is well-versed and looks back on 15 years of musical production, including several film scores, on the setting of poems (Tsvetajeva, Brodski, Breton, …), on collaborations with Ryuichi Sakamoto, Antye Greie/AGF, John Beltran, or Thomas Brinkmann…. Her vocals have never been so animated, her songwriting has never sounded so complete, and her arrangements, for all their complexity, have never been so round. Guliagava is Beridze’s tenth album and it is nothing less than her masterpiece.”

SONAE
“Sonae’s ambient creations inhabit a subtle space within the musical cosmos; one where you can go to experience a kind of sonic weightlessness – just float off and let the sound waves wash over you.”

>file under: Ambient Sound Artist from Cologne
>listen + more info: Album “Far away is right around the Corner”

I had the pleasure to compose a track for the light installation
future_grid
by Mischa Kuball
for the “Gichtgas-Schieber” at the Peter-Behrens-Bau in Oberhausen.
Old industrial machines out of function – now put into light and sound.
My industrial machine track about the dictatorship of cats is Katzendiktatur
Foto: Erik Denneborg, © Archiv Mischa Kuball, Düsseldorf / VG Bild-Kunst Bonn, 2022 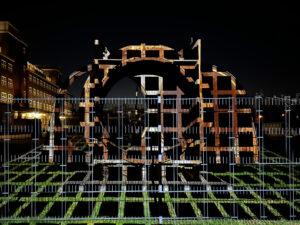