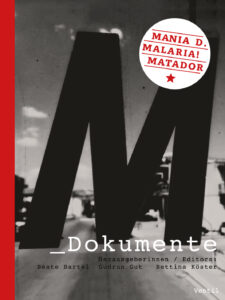 all about Mania D, Malaria!, Matador

Extensive show of works by the three iconographic underground bands

The book project “M_Dokumente” focuses on the explicitly female perspective of the all-female bands Mania D., Malaria! and Matador on the West Berlin music and art scene from the late 1970s on.

The three bands around Bartel, Köster and Gut played concerts, released records and toured around the world in different formations from 1979 on. What stood out and was new was the self-determined appearance of the musicians, which was reflected in their music and lyrics as well as in their unique style and the genre-crossing approach of “more art in the music, more music in the art”. To this day, the three M_Bands are considered visionary, they shaped a new image of women in pop culture and are pioneers and role models for important and necessary emancipatory movements in the music industry.

In German and English.

get it directly at Ventil Verlag