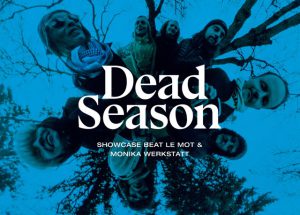 Live electronic orchestra Monika Werkstatt (Beate Bartel, Gudrun Gut, Islaja, and Pilocka Krach) meets theatre group Showcase Beat Le Mot. Together the two four-member groups take a contemporary look at the four seasons. Winter, spring, summer, autumn: In honour of the waning weather cycle, one musician and one member of Showcase Beat Le Mot take up one of the seasons, giving it shape in sound and image. The method used by the temporary music theatre collective is to alternate between fixed agreements and wild adventure. Since there’s nothing more fickle than the weather, they test out the margins of the spectacle in improvisation. Each collective provides the other with what it’s lacking: in gender, movement and technical skills. When the weathermakers step into action with their stumbling dramaturgy of quantum leaps and free association, sun storms send out psychomagnetism and glittering stardust. In the end everything winds up in the fifth season, the Dead Season.